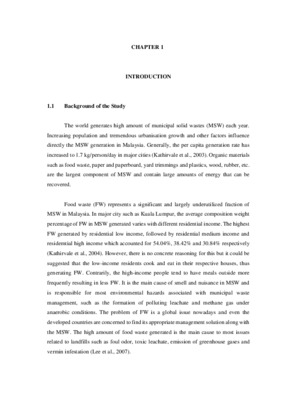 The potential of food waste as an energy source

Malaysia is overdependence on fossil fuels as the primary source of energy. The issues related to environmental effects and energy security has driven the nation towards renewable energy, specifically biomass. In this case, food waste (FW) represents a significant and largely underutilized fraction of municipal solid waste (MSW) in Malaysia. MSW generated daily in Malaysia range from 0.8 to 0.9 kg per household in general and about 1.62 kg per household in densely populated cities such as Kuala Lumpur with FW constituting approximately 60 % of the total solid waste (Saeed et al., 2009; Kathrivale et al., 2003). Improper management of these MSWs can cause large scale contamination of soil, water and air, contributes to greenhouse gas emissions and allow huge potential economic values uncaptured. Therefore, this work is trying its best to evaluate the feasibility of food waste as a potential source of energy through torrefaction process by manipulating temperature, residence time and particle size. This process is carried out at temperatures ranging from 280°C to 320°C, under an inert atmosphere (Deng et al., 2009). In this study, torrefaction of FW was conducted in a tubular vertical reactor by flowing the nitrogen gas through the reactor to ensure an inert atmosphere. The effects of various torrefaction temperature (280ºC, 300ºC and 320ºC), residence time (15 mins, 30 mins and 60 mins) as well as particle size distribution (0.5 mm, 1 mm and >1 mm) on the proximate analysis, ultimate analysis, calorific value, mass yield and higher heating value of raw FW and torrefied FW were investigated. From the results obtain, it is found out that temperature shows the most significant effect on the treated sample. Therefore, the optimum condition for torrefaction of FW is 320 °C, 60 minutes and 0.5 mm that yield the best performance by having highest fixed carbon content of 20.46 wt %, lowest hydrogen and oxygen content of 6.29 wt % and 19.13 wt % respectively. In term of calorific value, torrefied FW possess 6252.82 kJ/kg with the lowest mass yield. The energy resulted from higher heating value is 24.45 MJ/kg. As a conclusion, a dry and blackened solid product known as biochar is obtained, which has comparable fuel properties like coal and able to be used as a fuel for co-firing applications