Due to the high homologous temperature and fast cooling rates, the microstructures of SnAgCu (SAC) solders are in a meta-stable state in most applications, which is the cause of significant microstructural evolution and continuous variation in the mechanical behavior of the joints during service. The link between microstructures evolution and deformation behavior of Sn-4.0Ag-0.5Cu solder during isothermal ageing is investigated. The evolution of the microstructures in SAC solders are visualized at different scales in 3D by using a combination of synchrotron x-ray and focused ion beam/scanning electron microscopy tomography techniques at different states of ageing. The results show that, although the grain structure, morphology of dendrites, and overall volume fraction of intermetallics remain almost constant during ageing, considerable coarsening occurs in the Ag3Sn and Cu6Sn5 phases to lower the interfacial energy. The change in the morphometrics of sub-micron intermetallics is quantified by 3D statistical analyses and the kinetic of coarsening is discussed. The mechanical behavior of SAC solders is experimentally measured and shows a continuous reduction in the yield resistance of solder during ageing. For comparison, the mechanical properties and grain structure of β-tin are evaluated at different annealing conditions. Finally, the strengthening effect due to the intermetallics at different ageing states is evaluated by comparing the deformation behaviors of SAC solder and β-tin with similar grain size and composition. The relationship between the morphology and the strengthening effect due to intermetallics particles is discussed and the causes for the strength degradation in SAC solder during ageing are identified 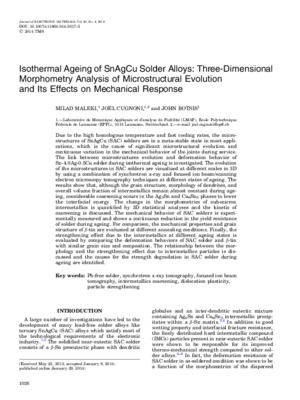