The aim of the present study was to compare four different types of fixed canine-to-canine retainer regarding the maximum and residual force system generated on a canine during the intrusive in vitro loading of the rest of the anterior teeth. Retainers constructed from Ortho-FlexTech gold chain 0.038×0.016-inch (rectangular, 0.96×0.40 mm²), Tru-Chrome® 7-strand twisted 0.027-inch (round, 0.68 mm diameter) steel wire, and Wildcat 0.0175-inch (round, 0.44 mm) and 0.0215-inch (round, 0.55 mm) 3-strand Twistflex steel wire bonded on the anterior teeth of an acrylic resin model, installed in the Orthodontic Measurement and Simulation System. The force system on the canine was recorded during the loading of the anterior teeth as well as the residual force system at the same tooth after the unloading. During maximum loading, the gold chain exerted the lowest and the 0.0215-inch archwire the highest force and moment magnitude. Residual forces and moments were exerted on the canine after the unloading in all retainer types, i.e., the evaluated fixed retainers were not passive after in vitro vertical loading. The lowest magnitude was measured in gold chain retainers and the highest in cases of the high formable/low yield strength 0.027-inch archwire. This fact may explain the unexpected movements of teeth bonded on fixed retainers detected long-term in vivo 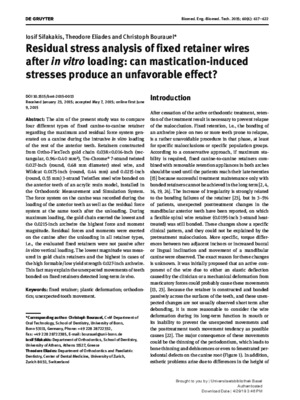