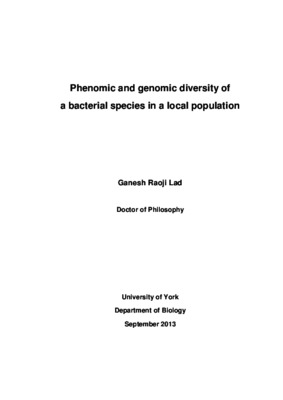 Biology aims to understand life and life processes. DNA is the blueprint of life and hence analysis of DNA sequences is expected to explain the way in which life manifests. The genomes of a large number of organisms have been sequenced and more are being sequenced every day. However, just knowing the DNA sequence does not tell us the manner in which it expresses itself to confer phenotypes on an organism. Hence, after the DNA sequence is obtained, it is important to identify the genes in the sequence, their organisation, their complex interactions and their function in the expression of different phenotypes. Bacteria belonging to the genus Rhizobium exhibit immense genotypic and phenotypic diversity. In this thesis, we look at the difference in the metabolic fingerprints of 72 isolates belonging to the genus Rhizobium isolated from leguminous plants near Wentworth College, University of York. Sequence data from the 72 isolates was used to correlate the phenotypic diversity to the sequence diversity in order to predict the role of genes involved in metabolism of the substrates investigated. Of the 95 substrates investigated, the ability of the strains to utilize only one substrate viz. g-hydroxybutyrate (GHB) showed a near absolute correlation to the presence of two genes in the genome data viz. pRL100135 and pRL100136. The mutation of pRL100135 showed a pronounced decrease in the ability of the test organism to use GHB. The mutation of pRL100136 decreased, but did not abolish, the ability to use GHB. Complementation of mutation by introduction of an intact copy cloned into a plasmid under the control of a strong promoter significantly restored the ability of the mutated test bacterium to utilize GHB to significant levels. The study shows that it is possible to predict the role of genes associated with a phenotype by looking at correlation between the variation in the phenotype in a population and the corresponding gene presence-absence data. However, this approach is both time-consuming and expensive. Of the 95 substrates investigated, only one showed a near-absolute correlation between the appearance of a phenotype and gene presence-absence data. Although an alternate approach to build mutant library and study the effect of mutation in every single gene on a larger array of substrates is possible, that too, would prove expensive. Hence, in conclusion, it can be said that the process of correlating genotype (or specific genes) to phenotypes will probably have to await development of new, cheap, quick and more efficient techniques