Differences in gene expression occur due to cell type differentiation, the stages of an organism’s life cycle, genetic variation, and changes in the environment. The quantification of these changes can be valuable for helping deduce the molecular mechanisms underlying the development of model organisms such as Arabidopsis. A pair of homeobox genes, ARABIDOPSIS THALIANA HOMEOBOX GENE1 (ATH1) and SHOOT MERISTEMLESS (STM), encode transcription factors that play key roles in establishing organ boundaries in Arabidopsis flowers. Plants that carry mutations in both of these genes are missing floral organ-stem boundary regions and fail to shed their outer floral organs. Previous studies have shown that expression of HAESA, a receptor-like kinase that activates a signaling cascade necessary for organ shedding, is substantially reduced in stm ath1 mutant flowers. RNA-Sequencing (RNA-Seq) was used to profile the transcriptomes of wild-type and stm ath1 inflorescences (clusters of flowers). The first aim of my study was to test the hypothesis that the expression of HAE is reduced in stm ath1 inflorescences compared to wild-type. The second aim was to identify other candidate genes whose expression may be regulated by the STM and ATH1 transcription factors and that may play downstream roles in forming organ boundaries and regulating organ abscission. My analysis of a pilot RNA-seq study carried out through the ‘RNA-Seq for the Next Generation’ project at Cold Spring Harbor Laboratory identified a set of twenty-four genes that are expressed at significantly lower levels in stm ath1 mutants compared to wildtype. Although expression of HAE is also reduced in stm ath1 plants compared to wildtype, this result does not fall within the range considered to be significant 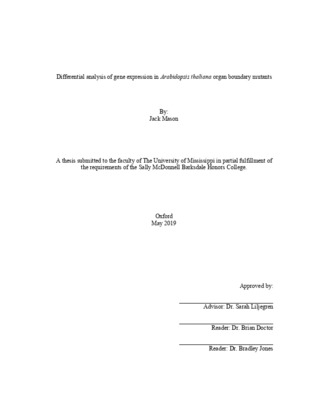 The University of Mississippi

This paper was published in The University of Mississippi.