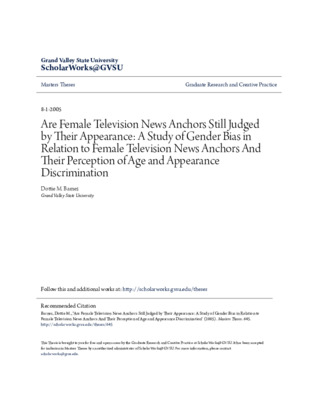 Are Female Television News Reporters Still Judged by Their Appearance Many female television news anchors and reporters believe the emphasis placed on physical appearance in the 1980s and 1990s exists in the same magnitude today. As of 1998, women comprised more than one-third of the television news workforce in the United States and half of all television news reporters and anchors. According to testimonials from female news anchors, women continue to feel pressured to look young and attractive. Studies show female anchors believe they have overcome some of the gender bias encountered in the 1980s and early 1990s. A 2005 survey of female television news anchors in the western Michigan area conducted by the researcher showed most respondents agreed or strongly agreed that too much emphasis is placed on their appearance