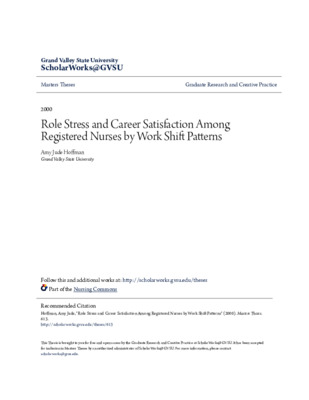 In today’s health care climate, the need to understand the effects of work shift patterns on role stress and career satisfaction of registered nurses (RNs) has never been greater. Therefore, the purpose of this descriptive study was to examine differences in the level of role stress and career satisfaction among hospital-based RNs by shift length. Data were collected through the use of standardized questionnaires from a probability sample of 208 RNs. The results indicated that RNs practicing in 12-hour work shift patterns experienced significantly higher stress levels that RNs working 8-hour shifts. Additionally, workload issues and dealing with death and dying were more stressful for 12-hour RNs. Although similar perceptions of career satisfaction were noted between the two groups, significant differences were found in the areas of control, salary, technical skill, and administrative interference. Pay. autonomy, and professional status were found to be the most important determinants of career satisfaction