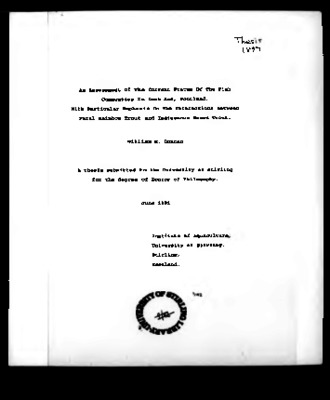 An assessment of the current status of the fish communities in Loch Awe, Scotland, with particular emphasis on the interactions between feral rainbow trout and indigenous brown trout

This study investigated the interactions between feral rainbow trout and the native fish species of Loch Awe, Argyll, Scotland, with the relationship between rainbow trout and brown trout receiving particular attention. Rainbow trout are found throughout Loch Awe but under normal circumstances they are only found in large numbers around the fish farms. The distribution of brown trout around the fish farms is only adversely affected when the rainbow trout to brown trout ratio exceeds a high but undefined threshold. Away from the fish farms rainbow trout are found in such low numbers that it is unlikely that they could have a significant impact on the native fish species. The highly localised distribution of the rainbow trout around the farms is related to the high dependency that they have on the uneaten pellets that pass through the cages. When they move away from the cages they consume large quantities of non-conventional prey items, this is due to the low repertoire of search prey images that they encounter in the fish farms. The native species largely consume conventional prey at and away from the fish farms depending upon its seasonal availability. No evidence was found of rainbow trout spawning in the catchment. However on a small number of occasions sexually mature rainbow trout were found in the spawning burns, and their progeny were shown to survive at least to the alevin stage. In interspecific interactions in the first year of their life brown trout socially dominated the progeny of spring spawned rainbow trout. An attempt was made to compare the present and historic catch per successful rod day (CPSR) on Loch Awe. This was complicated by differences in the recording systems, and the absence of information on unsuccessful fishing days in the historic data set. Accepting this shortcoming, a comparison showed that the current CPSR is considerably lower than it was previously. It was suggested that this was due to the large increase in fishing effort that has occurred in recent years. The yield of brown trout to anglers is similar to that from other unstocked upland reservoirs. There was a marked decline in the catch of rainbow trout between 1987 and 1988. At present there is little evidence of the rainbow trout having a serious impact on the native species in Loch Awe