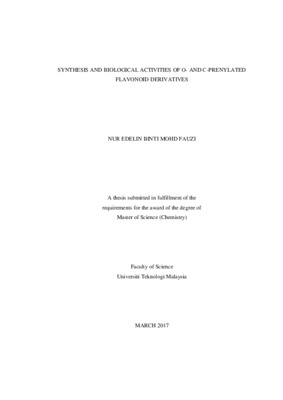 Synthesis and biological activities of O- and C-prenylated flavonoid derivatives

Chalcones scaffolds have attracted many researchers to investigate their synthetic routes, potential biological activities and their roles as intermediates for naturally occurring flavanoid skeletons. This study focused on the synthesis of chalcones bearing the O-, C-prenyl and chromane as substituents. The target compounds were purified by chromatographic methods and the structures of these compounds were determined by using infrared (IR), nuclear magnetic resonance (NMR) and mass spectrometry (MS) spectroscopies. The prenylated precursors were synthesized starting from 2,4-dihydroxyacetophenone (65) and 2,4,6-trihydroxyacetophenone (93). Prenylation of 2,4-dihydroxyacetophenone using prenyl bromide has been successfully accomplished to produce 2-hydroxy-4-O-prenylacetophenone (101). A reaction of 2,4,6-trihydroxyacetophenone with prenyl bromide in the presence of base resulted in a mixture and the chromatographic purification gave 2,4,6-trihydroxy-3-C-prenylacetophenone (132) and 2,4-dihydroxy-5,6-chromanacetophenone (133). Compound (133) was prenylated into 2-hydroxy-4-O-prenyl-5,6-chromanacetophenone (136). C-prenylated acetophenone (132) was then converted to 2-hydroxy-3-C-prenyl-4,6-dimethoxyacetophenone (137) using methyl iodide in the presence of potassium carbonate. Claisen-Schmidt condensation of O- and C-prenylated acetophenone with individual benzaldehydes, namely 4-(N,N-dimethyl)aminobenzaldehyde (61), 2-methoxybenzaldehyde (126), 4-isopropylbenzaldehyde (127), 3,4-dimethoxybenzaldehyde (128) and 4-chlorobenzaldehyde (129) resulted in the formation of two series of chalcones, each consisting of five chalcones. These two series differ in the existence of prenyl substituents on ring A of the chalcone structure. Five chalcones bear O-prenyl and five others bear C-prenyl substituent with both series having the same substituents on ring B consisting of 4-(N,N-dimethyl)amino, 2-methoxy, 4-isopropyl, 3,4-dimethoxy and 4-chloro substituents. Chromanochalcone (152) was the sole compound successfully synthesized with the aid of prenylation of free hydroxyl group of the chromanacetophenone (133) precursor. All the synthetic compounds were screened for antibacterial activity by the micro dilution method against two bacteria strains, namely Gram positive (Staphylococcus aureus and Bacillus subtilis) and Gram negative (Pseudomonas aeruginosa and Escherichia coli). The compounds were also tested for 15-LOX assay using Lipoxygenase inhibitory screening assay kit (Item No. 760700). All the synthetic compounds did not show activity against the bacteria tested, while compound (138) and (145) showed moderate lypoxygenase activity at 100 M concentration with 53.9% and 50.9% inhibition, respectively