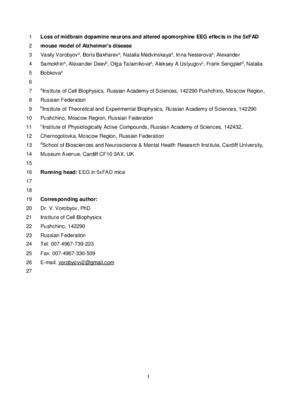 Cognitive malfunction, synaptic dysfunction, and disconnections in neural networks are core deficits in Alzheimer's disease (AD). 5xFAD mice, a transgenic model of AD, are characterized by an enhanced level of amyloid-β and abnormal neurotransmission. The dopaminergic (DA) system has been shown to be involved in amyloid-β transformations and neuronal plasticity; however, its role in functional network changes in familial AD still remains unclear. In 5xFAD and non-transgenic freely moving mice, electroencephalograms (EEGs) were simultaneously recorded from the secondary motor cortex (MC), superficial layers of the hippocampal CA1 area (HPC), substantia nigra (SN), and ventral tegmental area (VTA). EEGs and their frequency spectra were analyzed before and after systemic injection of a DA receptor agonist, apomorphine (APO). In the baseline EEG from MC and HPC of 5xFAD mice, delta and alpha oscillations were enhanced and beta activity was attenuated, compared to control mice. In VTA and SN of 5xFAD mice, delta-theta activity was decreased and beta oscillations dominated. In control mice, APO suppressed delta activity in VTA to a higher extent than in MC, whereas in 5xFAD mice, this difference was eliminated due to attenuation of the delta suppression in VTA. APO increased beta activity in MC of mice from both groups while significant beta suppression was observed in VTA of 5xFAD mice. These mice were characterized by significant decrease of tyrosine hydroxylase immunopositive cells in both VTA and SN and of DA transporter in MC and hippocampal dentate gyrus. We suggest that the EEG modifications observed in 5xFAD mice are associated with alterations in dopaminergic transmission, resulting in adaptive changes in the cerebral networks in the course of familial AD development