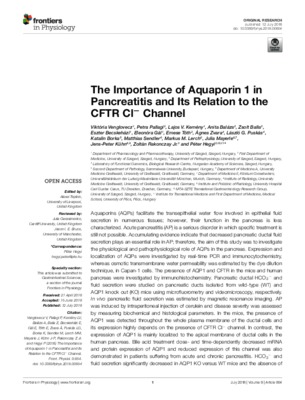 Aquaporins (AQPs) facilitate the transepithelial water flow involved in epithelial fluid secretion in numerous tissues; however, their function in the pancreas is less characterized. Acute pancreatitis (AP) is a serious disorder in which specific treatment is still not possible. Accumulating evidence indicate that decreased pancreatic ductal fluid secretion plays an essential role in AP; therefore, the aim of this study was to investigate the physiological and pathophysiological role of AQPs in the pancreas. Expression and localization of AQPs were investigated by real-time PCR and immunocytochemistry, whereas osmotic transmembrane water permeability was estimated by the dye dilution technique, in Capan-1 cells. The presence of AQP1 and CFTR in the mice and human pancreas were investigated by immunohistochemistry. Pancreatic ductal HCO3- and fluid secretion were studied on pancreatic ducts isolated from wild-type (WT) and AQP1 knock out (KO) mice using microfluorometry and videomicroscopy, respectively. In vivo pancreatic fluid secretion was estimated by magnetic resonance imaging. AP was induced by intraperitoneal injection of cerulein and disease severity was assessed by measuring biochemical and histological parameters. In the mice, the presence of AQP1 was detected throughout the whole plasma membrane of the ductal cells and its expression highly depends on the presence of CFTR Cl- channel. In contrast, the expression of AQP1 is mainly localized to the apical membrane of ductal cells in the human pancreas. Bile acid treatment dose- and time-dependently decreased mRNA and protein expression of AQP1 and reduced expression of this channel was also demonstrated in patients suffering from acute and chronic pancreatitis. HCO3- and fluid secretion significantly decreased in AQP1 KO versus WT mice and the absence of AQP1 also worsened the severity of pancreatitis. Our results suggest that AQP1 plays an essential role in pancreatic ductal fluid and HCO3- secretion and decreased expression of the channel alters fluid secretion which probably contribute to increased susceptibility of the pancreas to inflammation