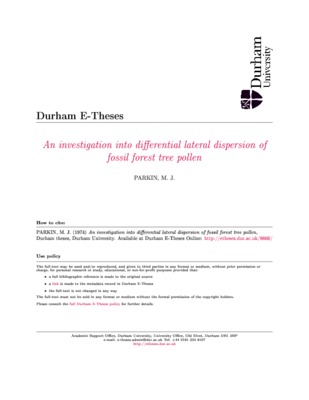 Pollen rain phenomena with particular reference to forest pollen are discussed with evidence from FAEGRI.K and IVERSON.J, TAUBER.H, TURNER.J, and DAVIS .M. B. The existence of fossil tree pollen rain in raised bogs is postulated. The problem of local bog pollen in the peat against which to count a varying forest pollen rain is seen as the major statistical problem', relating to even distribution both vertically and horizontally in the peat. Bolton Fell is described as an ideal zone VIb bog to illustrate fossil tree pollen dispersion. Preliminary Investigation of peat showed this bog to contain VIIb peat and the N. margin of the bog proved most suitable. A 500m transect was laid out and levelled with depth measurements every l0m. Thirteen profile simples were taken at Intervals. From eight replicate samples taken over the centre metre of each profile pollen slides were prepared and all grains counted until 150 tree grains had bean recorded. The varying numbers of bog plant pollen were used to compute the actual change in forest pollen frequency. The figures obtained are plotted against distance. A real reduction in forest pollen frequency is clearly shown from 0-100m with differences between values statistically valid, so confirming the work of TAUBER and TURNER on extant forest pollen dispersion. Anomalously higher values for fores pollen further out on transect are discussed, and an explanatory hypothesis outlined of a slowly growing bog with trees possibly growing in it on 'islands' of shallow peat