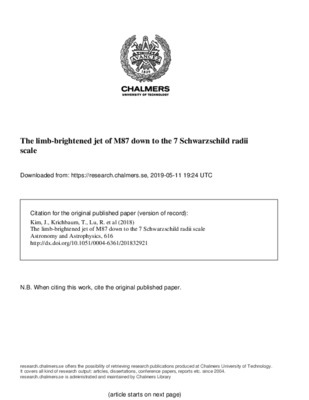 Messier 87 (M 87) is one of the nearest radio galaxies with a prominent jet extending from sub-pc to kpc scales. Because of its proximity and the large mass of its central black hole (BH), it is one of the best radio sources for the study of jet formation. We study the physical conditions near the jet base at projected separations from the BH of ∼7-100 Schwarzschild radii (Rsch). Global mm-VLBI Array (GMVA) observations at 86 GHz (λ = 3.5 mm) provide an angular resolution of ∼50 μas, which corresponds to a spatial resolution of only 7 Rschand reach the small spatial scale. We use five GMVA data sets of M 87 obtained from 2004 to 2015 and present new high angular resolution VLBI maps at 86 GHz. In particular, we focus on the analysis of the brightness temperature, the jet ridge lines, and the ratio of jet to counter-jet. The imaging reveals a parabolically expanding limb-brightened jet which emanates from a resolved VLBI core of ∼(8-13) Rschin size. The observed brightness temperature of the core at any epoch is ∼(1-3) 7 1010K, which is below the equipartition brightness temperature and suggests magnetic energy dominance at the jet base. We estimate the diameter of the jet at its base to be ∼5 Rschassuming a self-similar jet structure. This suggests that the sheath of the jet may be anchored in the very inner portion of the accretion disk. The image stacking reveals faint emission at the center of the edge-brightened jet on sub-pc scales. We discuss its physical implication within the context of the spine-sheath structure of the jet