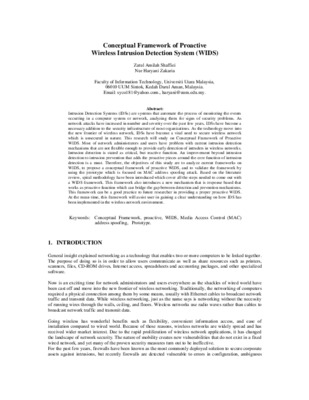 Intrusion Detection Systems (IDSs) are systems that automate the process of monitoring the events occurring in a computer system or network, analyzing them for signs of security problems.As network attacks have increased in number and severity over the past few years, IDSs have become a necessary addition to the security infrastructure of most organizations. As the technology move into the new frontier of wireless network, IDSs have become a vital need to secure wireless network which is unsecured in nature.This research will study on Conceptual Framework of Proactive WIDS. Most of network administrators and users have problem with current intrusion detection mechanisms that are not flexible enough to provide early detection of intruders in wireless networks.Intrusion detection is stated as critical, but reactive function. An improvement beyond intrusion detection to intrusion prevention that adds the proactive pieces around the core function of intrusion detection is a must.Therefore, the objectives of this study are to analyze current frameworks on WIDS, to propose a conceptual framework of proactive WIDS, and to validate the framework by using the prototype which is focused on MAC address spoofing attack.Based on the literature review, spiral methodology have been introduced which cover all the steps needed to come out with a WIDS framework. This framework also introduces a new mechanism that is response based that works as proactive function which can bridge the gap between detection and prevention mechanisms.This framework can be a good practice to future researcher in providing a proper proactive WIDS. At the mean time, this framework will assist user in gaining a clear understanding on how IDS has been implemented in the wireless network environment

Topics: QA76 Computer software
Year: 2006
OAI identifier: oai:repo.uum.edu.my:9593
Provided by: UUM Repository
Download PDF:
Sorry, we are unable to provide the full text but you may find it at the following location(s):