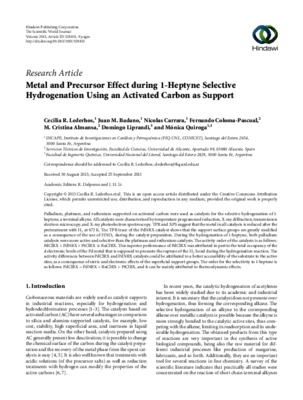 Palladium, platinum, and ruthenium supported on activated carbon were used as catalysts for the selective hydrogenation of 1-heptyne, a terminal alkyne. All catalysts were characterized by temperature programmed reduction, X-ray diffraction, transmission electron microscopy, and X-ray photoelectron spectroscopy. TPR and XPS suggest that the metal in all catalysts is reduced after the pretreatment with H2 at 673 K. The TPR trace of the PdNRX catalyst shows that the support surface groups are greatly modified as a consequence of the use of HNO3 during the catalyst preparation. During the hydrogenation of 1-heptyne, both palladium catalysts were more active and selective than the platinum and ruthenium catalysts. The activity order of the catalysts is as follows: PdClRX > PdNRX > PtClRX ≫ RuClRX. This superior performance of PdClRX was attributed in part to the total occupancy of the d electronic levels of the Pd metal that is supposed to promote the rupture of the H2 bond during the hydrogenation reaction. The activity differences between PdClRX and PdNRX catalysts could be attributed to a better accessibility of the substrate to the active sites, as a consequence of steric and electronic effects of the superficial support groups. The order for the selectivity to 1-heptene is as follows: PdClRX = PdNRX > RuClRX > PtClRX, and it can be mainly attributed to thermodynamic effects.UNL and CONICET