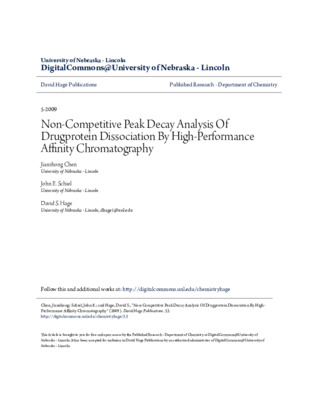 The peak decay method is an affinity chromatographic technique that has been used to examine the dissociation of solutes from immobilized ligands in the presence of excess displacing agent. However, it can be difficult to find a displacing agent that does not interfere with detection of the eluting analyte. In this study, a non-competitive peak decay method was developed in which no displacing agent was required for analyte elution. This method was evaluated for the study of drug-protein interactions by using it along with high-performance affinity chromatography to measure the dissociation rate constants for R- and S-warfarin from columns containing immobilized human serum albumin (HSA). Several factors were considered in the optimization of this method, including the amount of applied analyte, the column size, and the flow rate. The dissociation rate constants for R- and S-warfarin from HSA were measured at several temperatures by this approach, giving values of 0.56 (± 0.01) and 0.66 (± 0.01) s−1 at pH 7.4 and 37°C. These results were in good agreement with previous values obtained by other methods. This approach is not limited to warfarin and HSA but could be employed in studying additional drug-protein interactions or other systems with weak-to-moderate binding