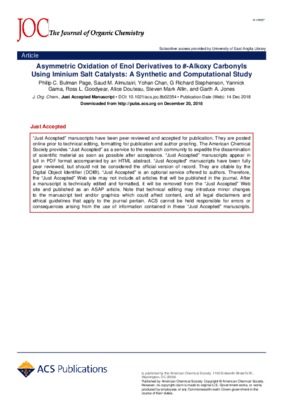 We report herein the first examples of asymmetric oxidation of enol ether and ester substrates using iminium salt organocatalysis, affording moderate to excellent enantioselectivities of up to 98% ee for tetralone-derived substrates in the α-hydroxyketone products. A comprehensive density functional theory study was undertaken to interpret the competing diastereoisomeric transition states in this example in order to identify the origins of enantioselectivity. The calculations, performed at the B3LYP/6-31G(D) level of theory, gave good agreement with the experimental results, in terms of the magnitude of the effects under the specified reaction conditions, and in terms of the preferential formation of the (R)-enantiomer. Just one of the 30 characterized transition states dominates the enantioselectivity, which is attributed to the adoption of an orientation relative to stereochemical features of the chiral controlling element that combines a CH interaction between a CH 2 group in the substrate and one of the aromatic rings of the biaryl section of the chiral auxiliary with a good alignment of the acetoxy group with the other biaryl ring, and places the smallest substituent on the alkene (a hydrogen atom) in the most sterically hindered position