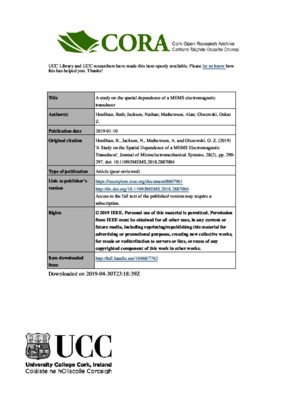 A study on the spatial dependence of a MEMS electromagnetic transducer

A MEMS, silicon-based device with a piezoelectric layer and an integrated magnet is presented for magnetic to electrical transduction. The cantilever structure can be configured either as an energy harvester to harvest power from an AC power line or as an AC current sensor. The positioning of the transducer with respect to the conductor is critical in both scenarios. For the energy scavenger, correct positioning is required to optimize the harvested power. For the current sensor, it is necessary to optimize the sensitivity of the sensor. This paper considers the effect of the relative position of the transducer with respect to the wire on the resulting electromagnetic forces and torques driving the device. It is shown in this paper that it is the net equivalent torque at the anchor that must be considered and not just the vertical component of the magnetic force as has been widely assumed heretofore. We show that for single wire conductors, the commonly made assumption that there exists two symmetrical power peaks at 45° either side of the wire is untrue, but rather that the net driving torque on one side of the wire can be more than an order of magnitude greater than the other