This preliminary study of ants in UiTM Negeri Sembilan, Kuala Pilah Campus (Beting) aim to identify ants subfamilies occurrence at three different sites in UiTM Negeri Sembilan, Kuala Pilah campus and to determine the ants subfamilies diversity in UiTM Negeri Sembilan, Kuala Pilah campus. The method used at all the three sites was baited-pitfall traps. The ant samples were collected from September 2013 to November 2013 and preserved using 80% ethanol. Four ants subfamilies were found at site A and Site B which are Dolichoderinae, Formicinae, Myrmicinae and Ponerinae. Meanwhile, only three subfamilies found in Site C which are Dolichoderinae, Myrmicinae and Ponerinae. There were 9963 individuals recorded at Site A, 50255 individuals recorded at Site B and 20917 individuals recorded at Site C. Formicinae is found to be the majority subfamily in Site A, whereas Myrmicinae contributes the largest percentage of existence in Site B and C. By using Shannon-Wiener Diversity Index, Site B is shown to the most diverse (H’ = 1.04). Site A possessed the highest subfamily richness (R = 0.33) by using Margalef’s Richness Index. Site C showed the highest subfamily evenness (E = 0.86) by using Evenness Indices 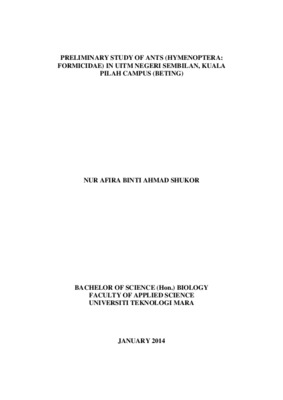