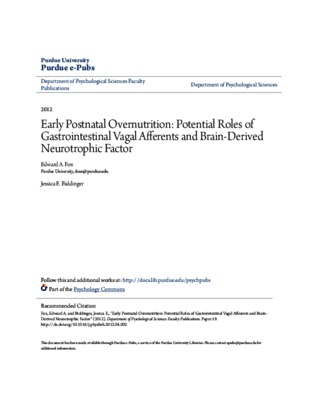 Early postnatal overnutrition: Potential roles of gastrointestinal vagal afferents and brain-derived neurotrophic factor. PHYSIOL BEHAV 00(0) 000-000, 2012. Abnormal perinatal nutrition (APN) results in a predisposition to develop obesity and the metabolic syndrome and thus may contribute to the prevalence of these disorders. Obesity, including that which develops in organisms exposed to APN, has been associated with increased meal size. Vagal afferents of the gastrointestinal (GI) tract contribute to regulation of meal size by transmitting satiation signals from gut-to-brain. Consequently, APN could increase meal size by altering this signaling, possibly through changes in expression of factors that control vagal afferent development or function. Here two studies that addressed these possibilities are reviewed. First, meal patterns, meal microstructure, and the structure and density of vagal afferents that innervate the intestine were examined in mice that experienced early postnatal overnutrition (EPO). These studies provided little evidence for EPO effects on vagal afferents as it did not alter meal size or vagal afferent density or structure. However, these mice exhibited modest hyperphagia due to a satiety deficit. In parallel, the possibility that brain-derived neurotrophic factor (BDNF) could mediate APN effects on vagal afferent development was investigated. Brain-derived neurotrophic factor was a strong candidate because APN alters BDNF levels in some tissues and BDNF knockout disrupts development of vagal sensory innervation of the GI tract. Surprisingly, smooth muscle-specific BDNF knockout resulted in early-onset obesity and hyperphagia due to increases in meal size and frequency. Microstructure analysis revealed decreased decay of intake rate during a meal in knockouts, suggesting loss of vagal negative feedback contributed to their increase in meal size. However, meal-induced c-Fos activation within the dorsal vagal complex suggested this effect could be due to augmentation of vago-vagal reflexes. A model is proposed to explain how high-fat diet consumption produces increased obesity in organisms exposed to APN, and may be required to reveal effects of EPO on vagal function