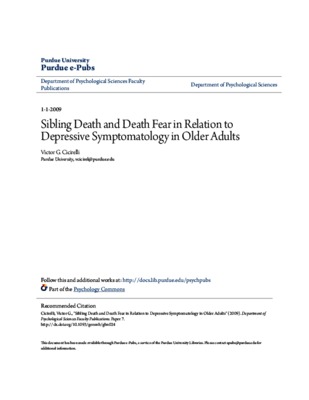 Previously overlooked factors in elders’ depressive symptomatology were examined, including death fear, sibling death, and sibling closeness. Participants were 150 elders (61 men, 89 women) aged 65 to 97 with at least one sibling. Measures were: proportion of deceased siblings, sibling closeness, the Death Fear subscale of the DAP-Revised, and the CES-D depression scale (20-item adult form). Age and education were exogenous variables in a structural equation model. Death fear, sibling closeness, and proportion of dead siblings were directly related to depression, with path coefficients of .42, -.24, and .13, respectively. Proportion of dead siblings had indirect effects on depression, as did age and education. Depressive symptomatology in old age is influenced by death fear related to sibling death as well as by poor relationships with them; it must be understood within a situational context including death fear and sibling relationships