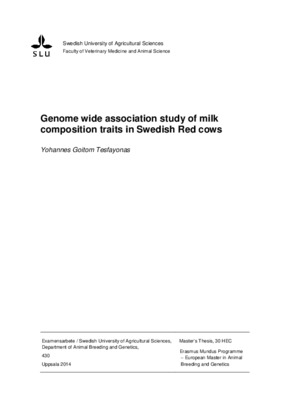 The aim of this study was to detect QTLs that affect milk composition traits such as fat yield, fat percent, citric acid, free fatty acids as well as milk properties like fat globule size, and determine the phenotypic variation explained by the QTLs. These traits play a crucial role in nutritional and technological properties of milk and its products. However, the underlying genetic basis of most of these traits is not well studied. Hence, a genome wide association study was carried out using variance component method, GRAMMAR-Gamma, in R package GenABEL. There were around 370 Swedish red cows with phenotypic record of the traits and genotypes were available for 617,388 SNPs. The GWAS revealed QTL for fat percentage on BTA14 and 20, and for citric acid on BTA1, 6, 12 and 20. The most significant SNPs on BTA 14 and 20 explained 6.8% and 6.5% of the phenotypic variation respectively; and the most significant SNPs for citric acid on BTA1, 6, 12, and 20 accounted for 6.8%, 6.9%, 7.9% and 8.4% of the phenotype variation respectively. Heritability of the traits ranged from 0.19 to 0.63. Furthermore, suggestive QTLs were found for fat yield on BTA14, 17 and 25; on BTA5, 19 and 24 for fat globule size; and on BTA5 for free fatty acids. Therefore, the findings of this study indicate that the markers identified in this study can be used in genetic improvement of the traits through marker assisted or genomic selection. In addition, since, this is the first analysis of these economically important traits in Swedish red cows; it can be used as a foundation for further research on the traits