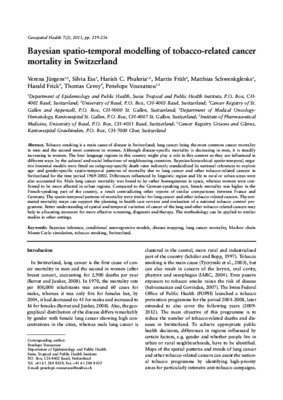 Tobacco smoking is a main cause of disease in Switzerland; lung cancer being the most common cancer mortality in men and the second most common in women. Although disease-specific mortality is decreasing in men, it is steadily increasing in women. The four language regions in this country might play a role in this context as they are influenced in different ways by the cultural and social behaviour of neighbouring countries. Bayesian hierarchical spatio-temporal, negative binomial models were fitted on subgroup-specific death rates indirectly standardized by national references to explore age- and gender-specific spatio-temporal patterns of mortality due to lung cancer and other tobacco-related cancers in Switzerland for the time period 1969-2002. Differences influenced by linguistic region and life in rural or urban areas were also accounted for. Male lung cancer mortality was found to be rather homogeneous in space, whereas women were confirmed to be more affected in urban regions. Compared to the German-speaking part, female mortality was higher in the French-speaking part of the country, a result contradicting other reports of similar comparisons between France and Germany. The spatio-temporal patterns of mortality were similar for lung cancer and other tobacco-related cancers. The estimated mortality maps can support the planning in health care services and evaluation of a national tobacco control programme. Better understanding of spatial and temporal variation of cancer of the lung and other tobacco-related cancers may help in allocating resources for more effective screening, diagnosis and therapy. The methodology can be applied to similar studies in other settings