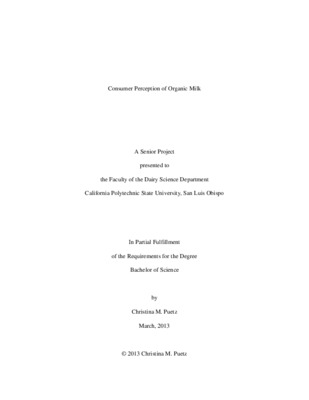 By Christina Puetz
Get PDF (7 MB)

The objective of this study was to determine the potential factors, reasons and beliefs that contribute to college aged consumers’ choice to purchase organic milk. The data were from survey of students using questions that were modeled after consumer issues and concerns over conventional milk as discussed in the literature review. This study was particularly interested in exploring differences between students in agriculture classes and non-agriculture classes. The literature referenced came from a variety of sources, including scientific journals, online articles, milk advisory boards, and governmental agencies. According to the literature review, consumer concerns and reasons for purchase of organic milk included environmental, nutritional, food safety (over antibiotic residue), use of recombinant bovine somatotropin (rBST), animal welfare, and taste preference. Each reason was analyzed with available literature to determine if these concerns or reasons for purchase were valid. For the reasons that were determined to be invalid, research was done to determine what milk advisory and marketing boards were doing to further educate the public. Further recommendations were made for ways in which these organizations could continue to educate the public and improve conventional milk’s image. The literature review showed that consumers could not differentiate between organic and conventional milk based on flavor, there were only slight nutritional profile differences, antibiotic residue does not end up in any conventional milk sold to consumers, rBST is safe for consumers and actually is good for the environment, animals are well cared for in both types of operations and finally conventional milk operations had lower emissions than organic. The literature review concluded that consumers were purchasing milk predominately based on their perception of organic milk rather than reality. In cross comparison, the college students surveyed predominately purchased a type of milk based on taste, price and health as opposed to any ethical issues. When their beliefs about conventional and organic milk were analyzed, the liberal arts and the agriculture students showed polarizing differences. While the literature review showed that consumers were highly supportive of organic practices and distrusted the health and safety of conventional milk, liberal arts students tended to hold the same beliefs while the agriculture students showed the opposite. It is recommended that a repeat of this study is done with a greater sample size of liberal arts students to confirm that their opinions are a reflection of most college students. In conclusion, it is highly recommended that the agriculture students of today are utilized as leaders for public education efforts in the future. Public education will be essential to redefine common perceptions about conventional agriculture that are not based in reason or reality