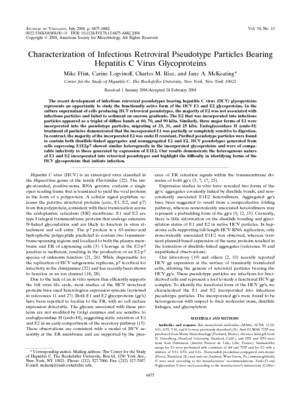 The recent development of infectious retroviral pseudotypes bearing hepatitis C virus (HCV) glycoproteins represents an opportunity to study the functionally active form of the HCV E1 and E2 glycoproteins. In the culture supernatant of cells producing HCV retroviral pseudotypes, the majority of E2 was not associated with infectious particles and failed to sediment on sucrose gradients. The E2 that was incorporated into infectious particles appeared as a triplet of diffuse bands at 60, 70, and 90 kDa. Similarly, three major forms of E1 were incorporated into the pseudotype particles, migrating at 33, 31, and 25 kDa. Endoglycosidase H (endo-H) treatment of particles demonstrated that the incorporated E1 was partially or completely sensitive to digestion. In contrast, the majority of the incorporated E2 was endo-H resistant. Purified pseudotype particles were found to contain both disulfide-linked aggregates and nonaggregated E1 and E2. HCV pseudotypes generated from cells expressing E1E2p7 showed similar heterogeneity in the incorporated glycoproteins and were of comparable infectivity to those generated by expression of E1E2. Our results demonstrate the heterogeneous nature of E1 and E2 incorporated into retroviral pseudotypes and highlight the difficulty in identifying forms of the HCV glycoproteins that initiate infection