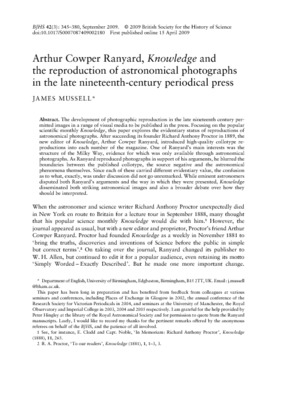 Arthur Cowper Ranyard, knowledge and the reproduction of astronomical photographs in the late Nineteenth-Century Periodical Press

By James Mussell
Get PDF (2 MB)

The development of photographic reproduction in the late nineteenth century permitted images in a range of visual media to be published in the press. Focusing on the popular scientific monthly Knowledge, this paper explores the evidentiary status of reproductions of astronomical photographs. After succeeding its founder Richard Anthony Proctor in 1889, the new editor of Knowledge, Arthur Cowper Ranyard, introduced high-quality collotype reproductions into each number of the magazine. One of Ranyard's main interests was the structure of the Milky Way, evidence for which was only available through astronomical photographs. As Ranyard reproduced photographs in support of his arguments, he blurred the boundaries between the published collotype, the source negative and the astronomical phenomena themselves. Since each of these carried different evidentiary value, the confusion as to what, exactly, was under discussion did not go unremarked. While eminent astronomers disputed both Ranyard's arguments and the way in which they were presented, Knowledge disseminated both striking astronomical images and also a broader debate over how they should be interpreted