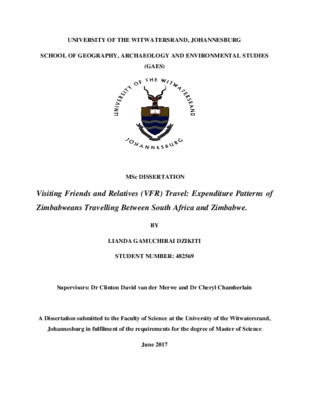 A dissertation submitted to the Faculty of Science at the University of the Witwatersrand, Johannesburg in fulfilment of the requirements for the degree of Master of Science, June 2017.Tourism contributes to economic development in both developed and developing countries. Visiting Friends and Relatives (VFR) travel is one of the largest forms of tourism on a global level. However, there has been limited research over the past decades on VFR travel. In recent times, VFR travel has attracted the attention of researchers due to increasing rate of migration resulting in the promotion of regional tourism through VFR travel. Despite the influx of migrants in South Africa, research on international VFR travel has been limited as most research on VFR travel has been on local level from one province to another. The purpose of this study is to evaluate the expenditure pattern of Zimbabweans travelling to and from South Africa for VFR purposes. Furthermore, the study seeks to identify the benefits of VFR travel to individual households in Zimbabwe. Using a quantitative framework, 200 questionnaires were distributed to Zimbabweans and a Statistical Package for the Social Science (SPSS) was used as an analysis tool. The theory of consumer behaviour was implemented to discuss and analyse the findings, revealing that VFR travellers from South Africa spend more than VFR travellers to South Africa on transport cost, food and beverages, entertainment and financial remittances. The expenditure is based on socio-demographic and travel-related characteristics. As a result of VFR travellers’ expenditure, the benefits, which are directed to individual households in Zimbabwe, include household upkeep, education, business investment, health and other reasons. Thus this study focuses attention on international VFR travel and its contribution to the tourism economy in Zimbabwe and South Africa. Key Words: Visiting Friends and Relatives (VFR), Tourism, Migration, Expenditure, Regional Tourism, South Africa, Zimbabwe.XL201