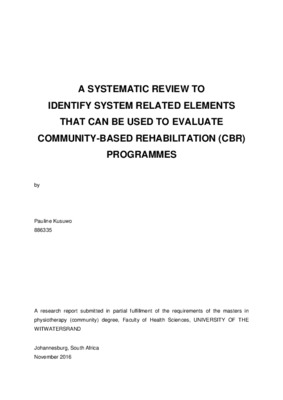 By Pauline Kusuwo
Get PDF (3 MB)

A research report submitted in partial fulfillment of the requirements of the masters in physiotherapy (community) degree, Faculty of Health Sciences, University of the Witwatersrand Johannesburg, South Africa November 2016Background: Community-based rehabilitation (CBR) is a community development strategy used to equalise opportunities for people with disabilities. CBR has been in use since 1978 and is implemented in more than 90 countries, however, there is a dearth of literature on the effectiveness of CBR. Research has shown that there is some reporting going on in CBR which in most cases describes the process of CBR rather than evaluate the CBR programmes. There is little evidence in the form of randomised control trials or systematic reviews, hence the field of CBR, in general, has been described as ‘data rich but evidence poor’. Several authors have pointed to the need for indicators that can be used facilitate the evaluation of CBR. Critics of the common set of indicators for CBR evaluation have singled out the heterogeneity of CBR programmes as a limitation to their use. Other studies, however, acknowledge that there are different areas of focus in CBR but suggest a comprehensive set of indicators from which one can choose to enable the evaluation of the different components of CBR. There are different aspects of CBR that can be evaluated which include the impact on the environment, the individual and the conditions under which the programme operates. Aim: The overall aim of the study was to identify the system-related elements that can be used to evaluate CBR programmes. Method: The study design was a qualitative systematic review. A systematic search was conducted on four data bases namely SCOPUS, PubMed, PsychINFO, Medline and on the WHO website. Grey literature was searched on Google scholar. Reviewed literature was for the period between 2005 and 2015. Articles in English pertaining to CBR evaluation from all over the world were included in this systematic review. No systematic reviews were included. The Evans (2003) appraisal tool was used to determine the level of evidence for the included articles. The methodological quality was assessed using the Critical Appraisal Skills Programme (CASP) for qualitative studies and the Strengthening The Reporting of Observational Studies (STROBE) checklist for quantitative observational studies. Results: 1734 titles were perused after which 49 abstracts were obtained. Of these, 34 were excluded for various reasons and 16 full articles were obtained. Duplicates were removed leaving nine articles for inclusion in the review. Three more articles were from the reference lists of the included studies bringing the total studies for possible review to twelve. Of the twelve studies ten were qualitative studies, one was a quantitative study and one was an expert opinion. The level of evidence for studies was good for three studies, fair for seven and poor for two studies. Two studies were subsequently excluded because of poor ranking on the hierarchy of evidence as influenced by methodological quality resulting in a sample size of ten. The focus of CBR varied across the reports with most focussing on the health, social and empowerment domains of the CBR matrix, and none focussing on education and only a few elements covering livelihoods. Forty-four elements were identified for evaluation of CBR. The categories of the CBR elements identified were Empowerment, Human resources, Service delivery, Policy and Management. Twenty-five elements were identified as evaluating the system under four subheading namely Policy, Service delivery, Community participation and Management. Conclusion: There still is a paucity of literature on CBR evaluation with qualitative methods being predominantly used in CBR evaluation. The quality of CBR literature is generally fair. CBR evaluations tend to focus on health, empowerment and social domains of the CBR matrix and therefore the elements identified for CBR evaluation focussed on the same domains. Of these twenty five elements which can be used to evaluate CBR systems were identified. There is need to expand CBR services to include the education and livelihood domains of the CBR matrix.MT201