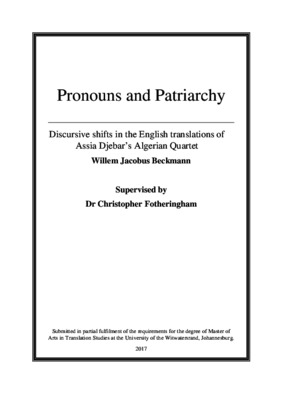 Submitted in partial fulfilment of the requirements for the degree of Master of Arts in Translation Studies at the University of the Witwatersrand, Johannesburg, 2017In this study, I set out to determine whether translation shifts can bring about significant changes in the discursive representation of male characters in English translations of two novels by the Algerian feminist writer Assia Djebar. The novels which I consider under this study are the first two volumes of Djebar’s Algerian Quartet, entitled L’Amour, la fantasia and Ombre sultane, along with their English translations, Fantasia: An Algerian Cavalcade and A Sister to Scheherazade. In this study, I focus primarily on one form of translation shift, the destruction of linguistic patterning, which results from the addition of possessive pronouns in references to male characters in translation. Through close textual analysis, I find that the addition of possessive pronouns results in significant changes in discursive representation, further resulting in the collapse of networks of overdetermination which are central to Djebar’s application of symbolic violence in writing. Similarly, I find that the destruction of linguistic patterning brings about a loss of polyphonic discourse in Djebar’s translated novels. I therefore conclude that the translator responsible for producing Fantasia: An Algerian Cavalcade and A Sister to Scheherazade, adopted a domesticating translation approach. In order to support my conclusion that the translator did indeed follow a domesticating translation approach, I draw on paratextual and close textual analysis to provide evidence. Theo Van Leeuwen’s Critical discourse analysis is the primary analytical tool employed in the close textual analysis sections of this study. Similarly, clear identification of translation shifts is rendered possible by Antoine Berman’s negative analytic. I also draw on Christopher Fotheringham’s conception of translation as symbolic violence, because symbolic violence is an important feature of Djebar’s writing, and because this is a translation-based study.XL201