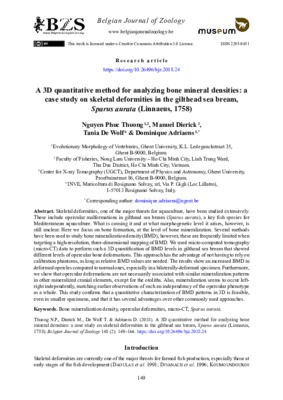 Skeletal deformities, one of the major threats for aquaculture, have been studied extensively. These include opercular malformations in gilthead sea bream (Sparus aurata), a key fish species for Mediterranean aquaculture. What is causing it and at what morphogenetic level it arises, however, is still unclear. Here we focus on bone formation, at the level of bone mineralization. Several methods have been used to study bone mineralization density (BMD), however, these are frequently limited when targeting a high-resolution, three-dimensional mapping of BMD. We used micro-computed tomography (micro-CT) data to perform such a 3D quantification of BMD levels in gilthead sea bream that showed different levels of opercular bone deformations. This approach has the advantage of not having to rely on calibration phantoms, as long as relative BMD values are needed. The results show an increased BMD in deformed opercles compared to normal ones, especially in a bilaterally-deformed specimen. Furthermore, we show that opercular deformations are not necessarily associated with similar mineralization patterns in other mineralized cranial elements, except for the otoliths. Also, mineralization seems to occur left-right independently, matching earlier observations of such an independency of the opercular phenotype as a whole. This study confirms that a quantitative characterization of BMD patterns in 3D is feasible, even in smaller specimens, and that it has several advantages over other commonly used approaches