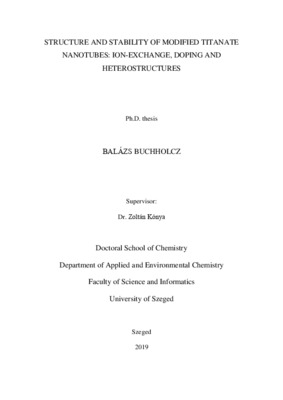 Increasing atmospheric concentration of CO2 and depletion of fossil energy sources are just a few examples for today’s major environmental challenges that materials science needs to be working on. Nanotechnology offers a new point of view because it deals with matter with at least one dimension in the 1 to 100 nm range and the size control brings about different physical and chemical properties compared to the bulk phase. There are many kinds of nanomaterials such as quantum dots, nanotubes and nanowires, nanosheets with thickness of a few atomic layers, or hierarchical structures. These materials can be applied as sensors, in energy storage, biomedicine or as catalyst supports because of their favorable properties. Discovery of carbon nanotubes made the ‘90s the decade of tubular nanostructures. In 1998, Kasuga firstly reported about trititanate nanotubes synthesized by an alkaline hydrothermal route. These rolled-up nanotubes have layered structure with a length of 100-200 nm, diameter of 10-12 nm and specific surface area of 200-300 m2/g. Protonated trititanate nanotubes (TiONT) transform into different types of titanium-dioxides upon heat treatment. Thus, from the application point of view, the investigation of TiONTs is as appropriate as that of TiO2. Since 1972, TiO2 has become one of the most investigated semiconductors especially in the field of heterogeneous photocatalysis, owing largely to Fujishima’s and Honda’s groundbreaking photoelectrochemical study. Titanium-dioxide exhibits photocatalytic activity only under UV irradiation. However, modifications such as doping or the formation of heterostructures can push its activity into the visible light region. The Department of Applied and Environmental Chemistry has been active in 1D titananate nanostructure research for nearly 15 years now. This was the research direction that I joined when I started my work at the Department. The goals of my doctoral studies were to prepare modified (ion-exchanged, doped, heterostructure based) titanate nanotubes and to investigate their heat stability and photocatalytic properties. In order to deepen our understanding of these nanostructures the following particular topics were investigated: Synthesis and heat stability of bismuth and/or antimony ion-exchanged titanate nanotubes: structural and morphological investigation. Investigation of nitrogen doping by thermal and ion-implantation methods. Study of the chemical environment of the incorporated nitrogen. Revealing the effect of dopants and post heat treatments on the structure and morphology of TiONT. Preparation of bismuth- and antimony-oxychloride based TiONT heterostructures by immobilization of oxychloride nanoparticles on the surface of nanotubes. Investigation the heat stability of composites and studying their photo-activated methyl orange dye decolorization properties.