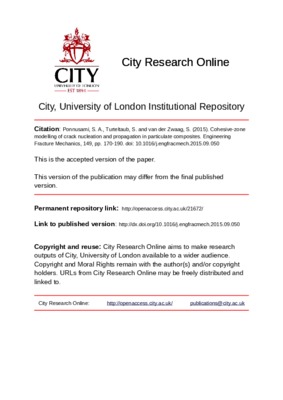 Cohesive-zone modelling of crack nucleation and propagation in particulate composites

A cohesive-zone approach is used to study the interaction between an approaching crack and a particle embedded in a matrix material as a function of the mismatch in elastic and fracture properties. Crack-particle interaction is a crucial issue governing fracture behavior of particle-dispersed materials. Special attention is given in the present work to the effect of the mismatch in fracture properties, namely fracture strength and energy, which has not been fully-explored in the literature. Based on extensive finite element simulations using cohesive elements, the basic fracture mechanisms governing the crack-particle interaction are identified, namely particle fracture, crack deflection and interface debonding. The details of the cracking sequences are elucidated and the role of secondary cracks is highlighted. The effect of pre-existing flaws on the fracture behavior is analyzed both for flaws inside the particle as well as flaws on the particle/matrix interface. Several flaw configurations in terms of size, orientation and location are considered. In addition, the effect of the mismatch between the matrix and the interface fracture properties is also considered for a wide range of adhesive characteristics. The results of the simulations are summarized in the form of several fracture maps for different configurations, whereby the main fracture mechanisms are identified in regions inside a two-dimensional space of strength and toughness mismatch between the particle and the matrix. It is observed that the mismatch in the fracture properties usually plays a more dominant role on the crack trajectory than the mismatch in elastic properties in a particle-dispersed system. Pre-existing flaws/defects in the particle and the interface are found to be one of the principal controlling factors that alter the crack propagation characteristics. These results can be used as a guideline for designing particulate composite system with a preferred fracture mechanism, namely matrix cracking, interface debonding or particle fracture