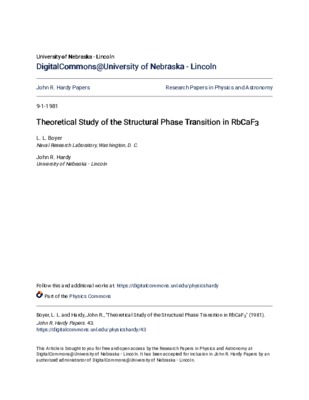 We have made a first-principles study of the structural phase transition at Tc = 193 K in RbCaF3, using interionic potentials derived by the Gordon-Kim approach, and a new extension of the quasiharmonic approximation for the free energy. The transition is caused by instability of a triply degenerate R-point vibration which leads to a coordinated rotation of the CaF6 octahedra. We find that, as the lattice contracts, the quasiharmonic frequency of the R-point vibrations becomes imaginary at approximately 1280 K: Below this temperature the static lattice energy, as a function of CaF6 rotation, has a double minimum. However, the quasiharmonic free energy has no minimum for finite rotations until T ≤ 125 K. Thus the present theory predicts that Tc = 125 K (cf Tc = 193 K. experimental). In the region between 125 and about 1280 K nests of modes about the zone edges have imaginary quasiharmonic frequencies. By a simple extension of the quasiharmonic theory their contribution to the free energy has also been included. We also predict that the melting temperature is approximately 1350 K, which agrees very well with the measured value of 1382 K. However, the predicted thermal expansion of the perovskite phase at room temperature is ~17% lower than the observed value. This leads us to argue that the good agreement between theoretical and experimental melting temperatures is, in part, due to a cancellation between neglected anharmonic effects and certain deficiencies in the interionic potentials. We also find that, for the tetragonal phase, the calculated c / a ratio and rotation angle for the CaF6 octahedra which minimize the static energy are in good agreement with measured values at low temperature. We also discuss certain more general implications of the present work. Specifically, we suggest that our results indicate that it may be more natural to regard the structural phase transition as arising from the unfreezing of the distortion associated with the lower-symmetry phase. Our results also provide a natural explanation for the apparently universal tendency of transition temperatures for zone-boundary instabilities to be raised by hydrostatic stress