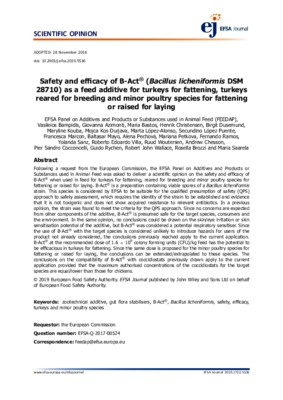 Safety and efficacy of B&#8208;Act&#174; (Bacillus&#160;licheniformis DSM 28710) as a feed additive for turkeys for fattening, turkeys reared for breeding and minor poultry species for fattening or raised for laying

Following a request from the European Commission, the EFSA Panel on Additives and Products or Substances used in Animal Feed was asked to deliver a scientific opinion on the safety and efficacy of B-Act\uae when used in feed for turkeys for fattening, reared for breeding and minor poultry species for fattening or raised for laying. B-Act\uae is a preparation containing viable spores of a Bacillus licheniformis strain. This species is considered by EFSA to be suitable for the qualified presumption of safety (QPS) approach to safety assessment, which requires the identity of the strain to be established and evidence that it is not toxigenic and does not show acquired resistance to relevant antibiotics. In a previous opinion, the strain was found to meet the criteria for the QPS approach. Since no concerns are expected from other components of the additive, B-Act\uae is presumed safe for the target species, consumers and the environment. In the same opinion, no conclusions could be drawn on the skin/eye irritation or skin sensitisation potential of the additive, but B-Act\uae was considered a potential respiratory sensitiser. Since the use of B-Act\uae with the target species is considered unlikely to introduce hazards for users of the product not already considered, the conclusions previously reached apply to the current application. B-Act\uae at the recommended dose of 1.6 9 109 colony forming units (CFU)/kg feed has the potential to be efficacious in turkeys for fattening. Since the same dose is proposed for the minor poultry species for fattening or raised for laying, the conclusions can be extended/extrapolated to these species. The conclusions on the compatibility of B-Act\uae with coccidiostats previously drawn apply to the current application provided that the maximum authorised concentrations of the coccidiostats for the target species are equal/lower than those for chickens