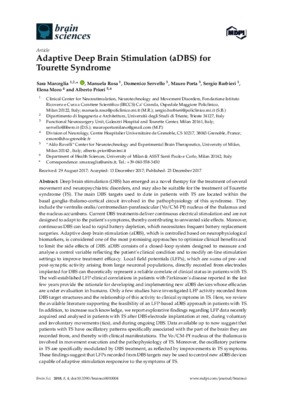 Deep brain stimulation (DBS) has emerged as a novel therapy for the treatment of several movement and neuropsychiatric disorders, and may also be suitable for the treatment of Tourette syndrome (TS). The main DBS targets used to date in patients with TS are located within the basal ganglia-thalamo-cortical circuit involved in the pathophysiology of this syndrome. They include the ventralis oralis/centromedian-parafascicular (Vo/CM-Pf) nucleus of the thalamus and the nucleus accumbens. Current DBS treatments deliver continuous electrical stimulation and are not designed to adapt to the patient\u2019s symptoms, thereby contributing to unwanted side effects. Moreover, continuous DBS can lead to rapid battery depletion, which necessitates frequent battery replacement surgeries. Adaptive deep brain stimulation (aDBS), which is controlled based on neurophysiological biomarkers, is considered one of the most promising approaches to optimize clinical benefits and to limit the side effects of DBS. aDBS consists of a closed-loop system designed to measure and analyse a control variable reflecting the patient\u2019s clinical condition and to modify on-line stimulation settings to improve treatment efficacy. Local field potentials (LFPs), which are sums of pre- and post-synaptic activity arising from large neuronal populations, directly recorded from electrodes implanted for DBS can theoretically represent a reliable correlate of clinical status in patients with TS. The well-established LFP-clinical correlations in patients with Parkinson\u2019s disease reported in the last few years provide the rationale for developing and implementing new aDBS devices whose efficacies are under evaluation in humans. Only a few studies have investigated LFP activity recorded from DBS target structures and the relationship of this activity to clinical symptoms in TS. Here, we review the available literature supporting the feasibility of an LFP-based aDBS approach in patients with TS. In addition, to increase such knowledge, we report explorative findings regarding LFP data recently acquired and analysed in patients with TS after DBS electrode implantation at rest, during voluntary and involuntary movements (tics), and during ongoing DBS. Data available up to now suggest that patients with TS have oscillatory patterns specifically associated with the part of the brain they are recorded from, and thereby with clinical manifestations. The Vo/CM-Pf nucleus of the thalamus is involved in movement execution and the pathophysiology of TS. Moreover, the oscillatory patterns in TS are specifically modulated by DBS treatment, as reflected by improvements in TS symptoms. These findings suggest that LFPs recorded from DBS targets may be used to control new aDBS devices capable of adaptive stimulation responsive to the symptoms of TS