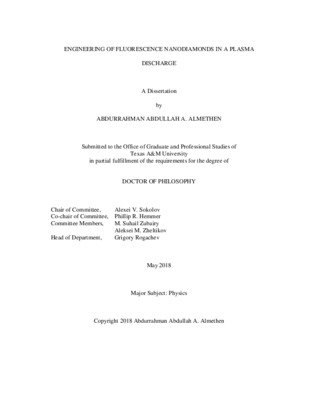 Engineering of Fluorescence Nanodiamonds in a Plasma Discharge

By Abdurrahman Abdullah A. Almethen
Get PDF (10 MB)

The fourth state of matter (plasma state) was first discovered in an electrical discharge tube (Crookes tube) and named as a radiant matter in 1879 by Sir William Crookes. Nowadays, plasma discharges have innumerable uses in several fields such as material processing, growth, etc. Plasma discharges can be created by electric fields that are AC, DC, Radio Frequency (RF), or Microwave (MW) or a combination, depending on the applications. Examples of plasma applications include growth by plasma-enhanced chemical vapor deposition (PECVD), etching, sputtering, implantation, and oxidation. For RF plasmas, either inductive and capacitive coupling can be used, and are common for synthesizing nanomaterial in the gas phase or in plasma-liquid interactions. For plasma assisted growth of diamonds, either homogeneous and heterogeneous nucleation mechanisms can occur depending on the type of plasma discharge and other reaction conditions. For example, growth can be at high pressure, atmospheric pressure, and low pressure. Starting materials for nanodiamonds (NDs) can be hydrocarbons like ethanol (C₂H₆O) or low molecular weight hydrocarbons like CH₄ and C₂H₄. For more controlled growth, diamondoids like Adamantane (C₁₀H₁₆), can be used as diamond seeds because they resemble a single lattice unit of diamond. Recently, more complex diamondoids as seeds such as pentamentane (C₂₆H₃₂) have been employed for constructing NDs with high efficiency by MW plasma chemical vapor deposition (CVD). The present work is a study that focuses on nucleation, engineering, and size controlling of NDs; it is motivated by the need to develop more controlled techniques for synthesizing or growing NDs especially for the formation of nitrogen-vacancy (N-V⁻) and silicon-vacancy (Si-V) centers. Based on the type of plasma source, the work was divided among three main projects. The first one was centered on studying the DC plasma discharge method at short and long distances between the electrodes as well as at various levels of vacuum. The second project concentrated on manufacturing NDs by applying capacitively coupled RF plasma discharges under various conditions. The third project involved the use of microwave plasma