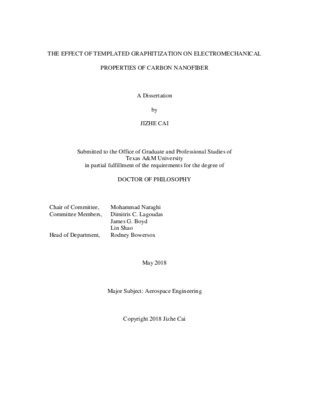 The Effect of Templated Graphitization on Electromechanical Properties of Carbon Nanofiber

Theory predicts that carbon nanofibers (CNFs), processed via carbonizing polymeric nanofibers, as down-sized version of carbon fibers (CFs) should be significantly stronger than CFs, due to size-dependent defects in CFs such as skin-core radial inhomogeneity. To close the gap between the predictions and experimentally achieved strength of CNFs, the processing-microstructure-properties relationship in CNFs was studied. The CNFs in my study were fabricated by thermal stabilization and carbonization of electrospun polyacrylonitrile (PAN) nanofibers which contain CNTs inclusions. In this research the formation of graphite-like structures (turbostratic domains) within CNFs was promoted by adding CNTs to the precursor in a process known as templated graphitization, in which the presence of CNTs can facilitate the arrangement of carbon atoms, obtained as a result of the carbonization of PAN, into a graphite-like structure (sp² carbon bonds) similar to what exists in CNTs. It is further demonstrated that the templating effect of CNTs is more pronounced when PAN chains are aligned with each other and with CNTs, as was achieved in this research by hot-drawing the precursors. The existence of CNTs effectively promotes the formation of highly ordered polymer interphase. The study on the microstructure and mechanical properties of CNFs confirms that the modification of the precursor microstructure, such as enhanced chain alignment, can be maintained during carbonization, and indeed leads to enhanced graphitic alignment. Based on the MEMS-based nano-mechanical tension tests on CNFs, the combined effect of precursor hot-drawing and graphitic templating effect resulted in CNFs with tensile strength and modulus of 6.9 GPa and 250 GPa, respectively, which are the largest values reported up to date for this type of material. Moreover, the multifunctional properties of electrospun CNFs, including piezoresisitivty and electrical conductivity, were restudied both experimentally and via continuum models, demonstrating the strong correlation between microstructure modification and properties improvement. In summary, a clear strategy for developing low-cost high performance CNF/CNTs hybrid nanofibers was obtained based on new understanding of the load bearing mechanism within CNF. These nanofibers can be used as the multifunctional building blocks for a host of applications, including aerospace and automotive industry