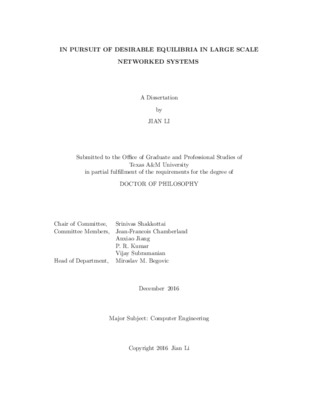 In Pursuit of Desirable Equilibria in Large Scale Networked Systems

This thesis addresses an interdisciplinary problem in the context of engineering, computer science and economics: In a large scale networked system, how can we achieve a desirable equilibrium that benefits the system as a whole? We approach this question from two perspectives. On the one hand, given a system architecture that imposes certain constraints, a system designer must propose efficient algorithms to optimally allocate resources to the agents that desire them. On the other hand, given algorithms that are used in practice, a performance analyst must come up with tools that can characterize these algorithms and determine when they can be optimally applied. Ideally, the two viewpoints must be integrated to obtain a simple system design with efficient algorithms that apply to it. We study the design of incentives and algorithms in such large scale networked systems under three application settings, referred to herein via the subheadings: Incentivizing Sharing in Realtime D2D Networks: A Mean Field Games Perspective, Energy Coupon: A Mean Field Game Perspective on Demand Response in Smart Grids, Dynamic Adaptability Properties of Caching Algorithms, and Accuracy vs. Learning Rate of Multi-level Caching Algorithms. Our application scenarios all entail an asymptotic system scaling, and an equilibrium is defined in terms of a probability distribution over system states. The question in each case is to determine how to attain a probability distribution that possesses certain desirable properties. For the first two applications, we consider the design of specific mechanisms to steer the system toward a desirable equilibrium under self interested decision making. The environments in these problems are such that there is a set of shared resources, and a mechanism is used during each time step to allocate resources to agents that are selfish and interact via a repeated game. These models are motivated by resource sharing systems in the context of data communication, transportation, and power transmission networks. The objective is to ensure that the achieved equilibria are socially desirable. Formally, we show that a Mean Field Game can be used to accurately approximate these repeated game frameworks, and we describe mechanisms under which socially desirable Mean Field Equilibria exist. For the third application, we focus on performance analysis via new metrics to determine the value of the attained equilibrium distribution of cache contents when using different replacement algorithms in cache networks. The work is motivated by the fact that typical performance analysis of caching algorithms consists of determining hit probability under a fixed arrival process of requests, which does not account for dynamic variability of request arrivals. Our main contribution is to define a function which accounts for both the error due to time lag of learning the items' popularity, as well as error due to the inaccuracy of learning, and to characterize the tradeoff between the two that conventional algorithms achieve. We then use the insights gained in this exercise to design new algorithms that are demonstrably superior