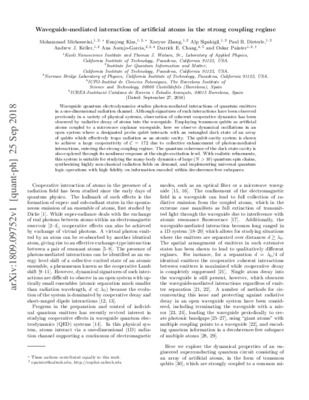 Waveguide-mediated interaction of artificial atoms in the strong coupling regime

Waveguide quantum electrodynamics studies photon-mediated interactions of quantum emitters in a one-dimensional radiation channel. Although signatures of such interactions have been observed previously in a variety of physical systems, observation of coherent cooperative dynamics has been obscured by radiative decay of atoms into the waveguide. Employing transmon qubits as artificial atoms coupled to a microwave coplanar waveguide, here we observe dynamical oscillations in an open system where a designated probe qubit interacts with an entangled dark state of an array of qubits which effectively traps radiation as an atomic cavity. The qubit-cavity system is shown to achieve a large cooperativity of $\mathcal{C}=172$ due to collective enhancement of photon-mediated interactions, entering the strong coupling regime. The quantum coherence of the dark state cavity is also explored through its nonlinear response at the single-excitation level. With realistic refinements, this system is suitable for studying the many-body dynamics of large ($N>10$) quantum spin chains, synthesizing highly non-classical radiation fields on demand, and implementing universal quantum logic operations with high fidelity on information encoded within decoherence-free subspaces.Comment: 19 pages, 8 figures, 5 appendice