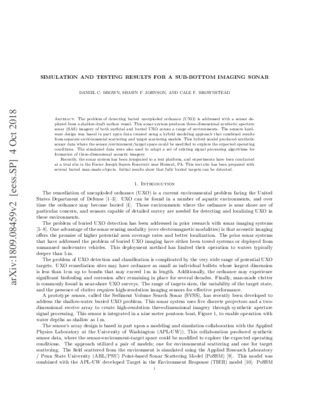 Simulation and Testing Results for a Sub-Bottom Imaging Sonar

The problem of detecting buried unexploded ordnance (UXO) is addressed with a sensor deployed from a shallow-draft surface vessel. This sonar system produces three dimensional synthetic aperture sonar (SAS) imagery of both surficial and buried UXO across a range of environments. The sensor's hardware design was based in part upon data created using a hybrid modeling approach that combined results from separate environmental scattering and target scattering models. This hybrid model produced synthetic sensor data where the sensor/environment/target space could be modified to explore the expected operating conditions. The simulated data were also used to adapt a set of existing signal processing algorithms for formation of three-dimensional acoustic imagery. Recently, the sonar system has been integrated to a test platform, and experiments have been conducted at a trial site in the Foster Joseph Sayers Reservoir near Howard, PA. This test site has been prepared with several buried man-made objects. Initial results show that fully buried targets can be detected.Comment: 10 pages, 7 figures Revision: Fixed typo in author nam