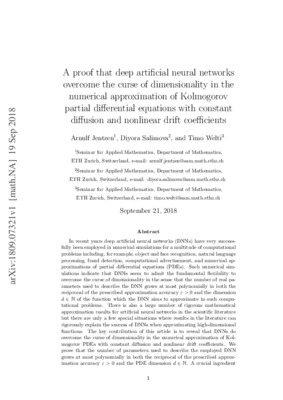 In recent years deep artificial neural networks (DNNs) have been successfully employed in numerical simulations for a multitude of computational problems including, for example, object and face recognition, natural language processing, fraud detection, computational advertisement, and numerical approximations of partial differential equations (PDEs). These numerical simulations indicate that DNNs seem to possess the fundamental flexibility to overcome the curse of dimensionality in the sense that the number of real parameters used to describe the DNN grows at most polynomially in both the reciprocal of the prescribed approximation accuracy $ \varepsilon > 0 $ and the dimension $ d \in \mathbb{N}$ of the function which the DNN aims to approximate in such computational problems. There is also a large number of rigorous mathematical approximation results for artificial neural networks in the scientific literature but there are only a few special situations where results in the literature can rigorously justify the success of DNNs in high-dimensional function approximation. The key contribution of this paper is to reveal that DNNs do overcome the curse of dimensionality in the numerical approximation of Kolmogorov PDEs with constant diffusion and nonlinear drift coefficients. We prove that the number of parameters used to describe the employed DNN grows at most polynomially in both the PDE dimension $ d \in \mathbb{N}$ and the reciprocal of the prescribed approximation accuracy $ \varepsilon > 0 $. A crucial ingredient in our proof is the fact that the artificial neural network used to approximate the solution of the PDE is indeed a deep artificial neural network with a large number of hidden layers.Comment: 48 page