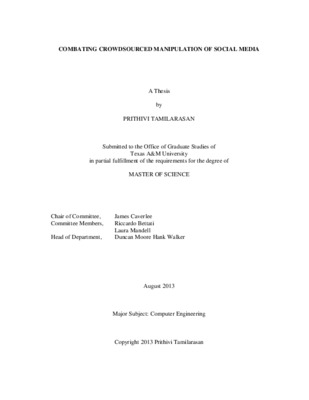 By Prithivi Tamilarasan
Get PDF (1 MB)

Crowdsourcing systems - like Ushahidi (for crisis mapping), Foldit (for protein folding) and Duolingo (for foreign language learning and translation) - have shown the effectiveness of intelligently organizing large numbers of people to solve traditionally vexing problems. Unfortunately, new crowdsourcing platforms are emerging to support the coordinated dissemination of spam, misinformation, and propaganda. These “crowdturfing” systems are a sinister counterpart to the enormous positive opportunities of crowdsourcing; they combine the organizational capabilities of crowdsourcing with the ability to widely spread artificial grass root support (so called “astroturfing”). This thesis begins a study of crowdturfing that targets social media and proposes a framework for “pulling back the curtain” on crowdturfers to reveal their underlying ecosystem. Concretely, this thesis (i) analyzes the types of campaigns hosted on multiple crowdsourcing sites; (ii) links campaigns and their workers on crowdsourcing sites to social media; (iii) analyzes the relationship structure connecting these workers, their profile, activity, and linguistic characteristics, in comparison with a random sample of regular social media users; and (iv) proposes and develops statistical user models to automatically identify crowdturfers in social media. Since many crowdturfing campaigns are hidden, it is important to understand the potential of learning models from known campaigns to detect these unknown campaigns. Our experimental results show that the statistical user models built can predict crowdturfers with very high accuracy