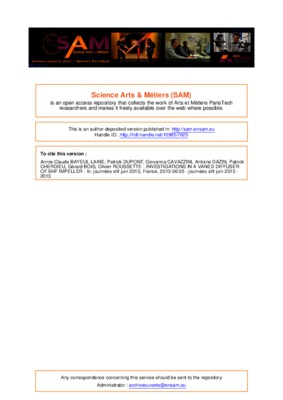 INVESTIGATIONS IN A VANED DIFFUSER OF SHF IMPELLER

The paper presents the numerical and experimental analysis of performance and internal flow behaviour in the vaned diffuser of a radial flow pump (Fig. 1) using PIV technique (Fig. 2), pressure probe traverses and numerical simulations. PIV measurements have been performed at different heights inside one diffuser channel passage for a given speed of rotation and various mass flow rates. For each operating condition, PIV measurements have been made for different angular positions of the impeller. For each angular position, instantaneous velocities charts have been obtained on two simultaneous views, which allows, firstly, to cover the space between the leading edge of the impeller and the diffuser throat and secondly, to get a rather good evaluation of phase averaged velocity charts and “fluctuating rates “. Hub to shroud directional probe traverses (Fig. 3) have also been performed using a 3 holes pressure probe along the diffuser width at different radial locations between the two diffuser geometrical throats. The numerical simulations were realized with the two commercial codes: i-Star CCM+ 7.02.011 (at LML), ii-CFX 10.0 (at University of Padova). Fully unsteady calculations of the whole pump were performed. Comparisons between numerical and experimental results are presented and discussed for different mass flow rates. In this respect, the effects of fluid leakage due to the gap between the rotating and fixed part of the pump model are analysed and discussed. Experimental results strongly depend on impeller position during its rotation. Pressure probe results are also depending on unsteady effects and this has to be taken into account for further data reduction analysis. The contours of radial and tangential velocity at mid high (Fig. 4) as well as the time-averaged values of radial and tangential velocity distributions allow leakage to be an important parameter that has to be taken into account in order to make comparisons between numerical and experiments. Henceforth, simulations with fluid leakages will be realized and unsteady probes will be used in order to confirm these previous results