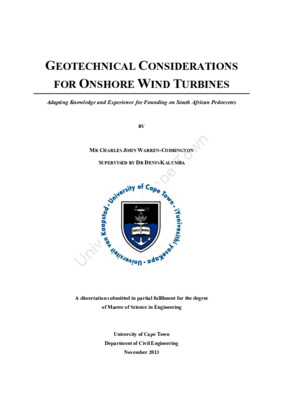 Wind energy has been placed at the centre of the South African Government's Renewable Energy Independent Producer Programme (REIPPP) with the purpose of addressing electricity capacity deficits and poor service delivery. In doing so, substantial wind farm development has been proposed for the Western, Eastern and Northern Cape of South Africa, with several projects already underway. Wind energy, from a technological standpoint, is regarded as a mature form of renewable energy. However, much of the wind turbine geotechnical experience was gained in the temperate climate of the Northern Hemisphere, where soil conditions differ significantly from those of South Africa. Simultaneously, although mature, wind energy is a novel field in South Africa. Therefore, this study sought the need bridge the gap between local South African soil conditions and international wind energy experience. It was against this backdrop that the following study was initiated, which aimed to provide insight into the site-specific geotechnical design of foundations for wind turbine structures. In doing so, this major objective was divided into four minor objectives, each contributing a major theme to the study, the key points of which are summarised below. It should be noted that the following study was limited to three-blade wind turbines mounted on conical tubular steel towers with shallow foundations

Topics: Civil Engineering
Publisher: Department of Civil Engineering
Year: 2013
OAI identifier: oai:localhost:11427/14069
Provided by: Cape Town University OpenUCT
Download PDF:
Sorry, we are unable to provide the full text but you may find it at the following location(s):