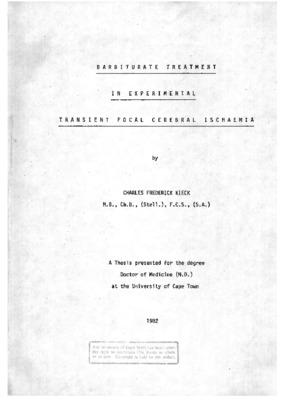 When the research, which forms the basis of this thesis was started in 1979, the theoretically attractive situation of transient focal cerebral ischaemia simulating a cerebral vessel occlusion followed by re-vascularization, had not been specifically investigated with barbiturate treatment. Cerebral infarction is progressive and evolves over hours, proceeding from ischaemia and functional loss to cell death. Sundt et al (1969), Crowell et al (1970), Hayakawa and Waltz (1975). Complete recovery is possible if re-vascularization is instituted in time. This time interval depends on the regional cerebral bloodflow during the period of the vessel occlusion and this bloodflow is provided by the collateral circulation. Thus, whether infarction results and the extent of it, becomes a factor of the period of ischaemia and the collateral circulation present. Dujovny et al (1976), Morawetz et al (1978), Ojeman et al (1979), Kieck and Crowell (1979), Jones et al (1981). This ischaemic period may vary tremendously from less than an hour to as much as 5 hours and occlusion times of up to an hour can be tolerated without infarction at very low regional cerebral bloodflow levels. Morawetz et al (1978), Kieck and Crowell (1979), Jones et al (1981). In the clinical situation there would be an obligatory delay from the onset of ischaemia to the institution of barbiturate treatment and completion of re-vascularization. Treatment during this period would thus be a major contribution if it could afford protection so as to allow restitution of cerebral bloodflow before irreversible infarction took place. The South African Vervet monkey was chosen for the investigation of the effect of barbiturate treatment on transient focal cerebral ischaemia in a model simulating the clinical event. In this experiment pentobarbital therapy would be delayed for 1 hour to provide for the expected delay that would occur from the onset of ischaemia to the institution of treatment. Similarly, ischaemia was to last 4 hours to allow for a minimum time interval necessary to complete the re-vascularization. It was also borne in mind that many stroke patients would be older people; the barbiturate dose of 30mg/kg would be such as to induce prolonged coma but not major cardiovascular disturbances with a fall in blood pressure and/or cardiac arrest

Topics: Cerebrovascular disorders - Drug therapy, Barbiturates
Publisher: Division of Neurosurgery
Year: 2017
OAI identifier: oai:localhost:11427/26336
Provided by: Cape Town University OpenUCT
Download PDF:
Sorry, we are unable to provide the full text but you may find it at the following location(s):