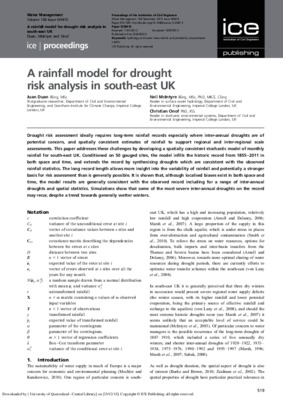 A rainfall model for drought risk analysis in south-east UK

Drought risk assessment ideally requires long-term rainfall records especially where inter-annual droughts are of potential concern, and spatially consistent estimates of rainfall to support regional and inter-regional scale assessments. This paper addresses these challenges by developing a spatially consistent stochastic model of monthly rainfall for south-east UK. Conditioned on 50 gauged sites, the model infills the historic record from 1855-2011 in both space and time, and extends the record by synthesising droughts which are consistent with the observed rainfall statistics. The long record length allows more insight into the variability of rainfall and potentially a stronger basis for risk assessment than is generally possible. It is shown that, although localised biases exist in both space and time, the model results are generally consistent with the observed record including for a range of inter-annual droughts and spatial statistics. Simulations show that some of the most severe inter-annual droughts on the record may recur, despite a trend towards generally wetter winters