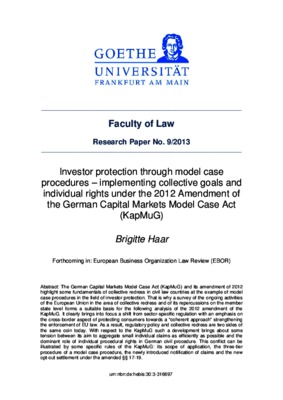 The German Capital Markets Model Case Act (KapMuG) and its amendment of 2012 highlight some fundamentals of collective redress in civil law countries at the example of model case procedures in the field of investor protection. That is why a survey of the ongoing activities of the European Union in the area of collective redress and of its repercussions on the member state level forms a suitable basis for the following analysis of the 2012 amendment of the KapMuG. It clearly brings into focus a shift from sector-specific regulation with an emphasis on the cross-border aspect of protecting consumers towards a “coherent approach” strengthening the enforcement of EU law. As a result, regulatory policy and collective redress are two sides of the same coin today. With respect to the KapMuG such a development brings about some tension between its aim to aggregate small individual claims as efficiently as possible and the dominant role of individual procedural rights in German civil procedure. This conflict can be illustrated by some specific rules of the KapMuG: its scope of application, the three-tier procedure of a model case procedure, the newly introduced notification of claims and the new opt-out settlement under the amended §§ 17-19