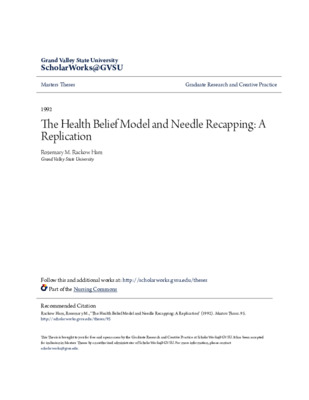 The Health Belief Model and Needle Recapping: A Replication

The purpose of this study was to examine the knowledge of Universal Precautions, the attitudes and beliefs regarding the risk of AIDS among emergency room and critical care nurses and physicians, and the needle recapping behavior that places them at risk for acquiring HIV infection. The Health Belief Model was the conceptual model.; The sample (n = 80) consisted of nurses (n = 68) and physicians (n = 12) who practice in the emergency room (n = 19) or a critical care unit (n = 61) in a community hospital. They completed a 31 item questionnaire. In addition, needle disposal boxes were opened and recapped needles were counted.; The findings revealed that health care workers believe they are susceptible to HIV and it is a serious disease. They identify the benefits of using Universal Precautions. Observed recapping behavior was 33% initially and at one month with an initial drop after the questionnaire. The findings support the need for locating equipment near the user area and further research to investigate the impact cues to action have on behavior