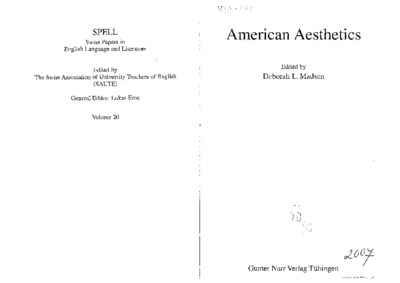 Literature in Transition : European aesthetics and the early American novel

By Philipp Schweighauser
Get PDF (650 KB)

This paper seeks to account for the strangely double nature of the early American novel. For twenty-first-century readers, novels such as Hugh Henry Brackenridge's Modem Chivalry, Susanna Rowson's Charlotte Temple or Charles Brockden Brown's Wieland seem firmly embedded in a premodern culture that subordinates the rights of art under those of religion, morality, and education. In their persistent didacticism, their claims to truthfulness and social utility, and their long authorial digressions, these texts perform those kinds of heteronomous functions Romantic theorizing and literary practice of the early nineteenth century would seek to reject in their quest for literary autonomy. Yet a closer look at early American novels also reveals elements of modern artistic practice that exist side by side with premodern residues. Brackenridge, for instance, repeatedly insists that his work is but an exercise in style devoid of ideas, praises originality and the figure of the genius, consistently privileges form over subject matter, and ridicules the excessive didacticism of his contemporaries. In such passages, we can see a modern consciousness at work. Tensions between these modern impulses and a premodern sensibility pervade both early novels and aesthetics, another invention of the eighteenth century. This paper discusses those tensions from a systems-theoretical perspective