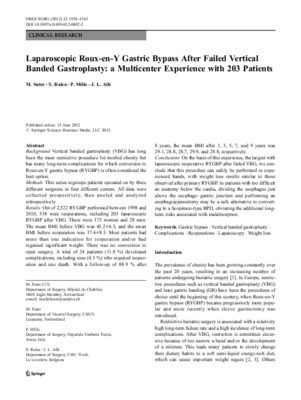 BACKGROUND: Vertical banded gastroplasty (VBG) has long been the main restrictive procedure for morbid obesity but has many long-term complications for which conversion to Roux-en-Y gastric bypass (RYGBP) is often considered the best option. METHODS: This series regroups patients operated on by three different surgeons in four different centers. All data were collected prospectively, then pooled and analyzed retrospectively. RESULTS: Out of 2,522 RYGBP performed between 1998 and 2010, 538 were reoperations, including 203 laparoscopic RYGBP after VBG. There were 175 women and 28 men. The mean BMI before VBG was 43.2 ± 6.3, and the mean BMI before reoperation was 37.4 ± 8.3. Most patients had more than one indication for reoperation and/or had regained significant weight. There was no conversion to open surgery. A total of 24 patients (11.8 %) developed complications, including nine (4.5 %) who required reoperation and one death. With a follow-up of 88.9 % after 8 years, the mean BMI after 1, 3, 5, 7, and 9 years was 29.1, 28.8, 28.7, 29.9, and 28.8, respectively. CONCLUSIONS: On the basis of this experience, the largest with laparoscopic reoperative RYGBP after failed VBG, we conclude that this procedure can safely be performed in experienced hands, with weight loss results similar to those observed after primary RYGBP. In patients with too difficult an anatomy below the cardia, dividing the esophagus just above the esophago-gastric junction and performing an esophagojejunostomy may be a safe alternative to converting to a Scopinaro-type BPD, obviating the additional long-term risks associated with malabsorption